In 2012, nine homes in Happisburgh, an historic village on England’s Norfolk coast, had to be knocked down after the road on which they were built, started to crumble away into the sea. In July 2013, in St Jouin Bruneval, Normandy, an estimated 30,000 tons of rock split from the 50-meter-high cliffs near the French city of Le Havre and plunged onto the public beach below. In June 2016, huge waves and king tides eroded about 50 meters of the Narrabeen and Collaroy beaches in Sydney, Australia badly damaging waterfront properties and putting them at risk of toppling into the sea. This October, in East-Sussex, England, thousands of tons of chalk crumbled away from the Seven Sisters cliffs at Birling Gap, followed a few days later by another large cliff fall at Seaford Head.

Researchers studying this erosion of coastal cliffs in Normandy needed to capture images of these hard-to-reach and unsafe landscapes. The operational challenges included strong winds, limi-ted time windows with optimal lighting, and safety concerns due to operating in an urban environment, which deman-ded high positioning accuracy. They turned to AltiGator, who equipped their OnyxStar XENA drone (UAV) with a Septentrio high-accuracy GNSS receiver and a Sony digital camera, to create the ideal airborne platform capable of collecting excellent results. 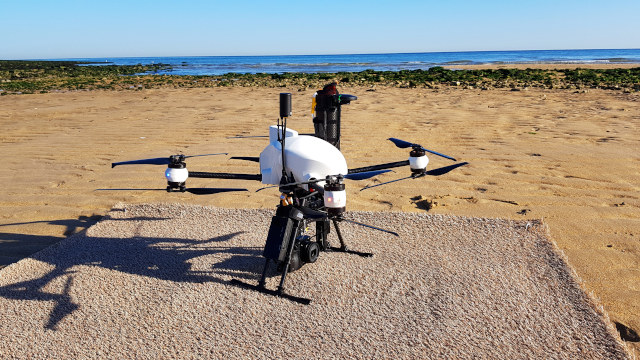 The process of erosion of coastal cliffs is slow and happens over a long time, however the actual cliff collapse is sudden and seemingly random. This complex dynamic makes it very hard to study and to determine the respective impacts of the many factors contributing to this erosion. Yet a thorough understanding of where and when cliff failures occur is essential for safety, especially near buildings, roads, and recreation areas, where landslides and rock falls can destroy property and injure or even kill people, in homes above the disaster or on beaches below it.

Acquiring this understanding requires data at high spatial resolution and with high refresh rates. Furthermore, measuring changes in an unstable and nearly vertical cliff face can be dangerous to the researchers, therefore in situ data are mainly collected by non-contact remote-sensing methods. The choice of sensing method depends on the geographic extent being studied, the spatial precision and refresh rate required, and the available budget.  Various techniques are available for these remote sensing activities, including terrestrial mapping, aerial mapping, UAV lidar and UAV photogrammetry. For this project, UAV photogrammetry was the ideal choice as it could overcome the difficulty of accessing the cliffs.

A small UAV is a particularly safe, efficient, and cost-effective way to collect imagery on coastal cliffs. Researchers can easily transport and deploy the platform and then control the collection and monitor local conditions while remaining at a safe distance from the cliff they are studying. 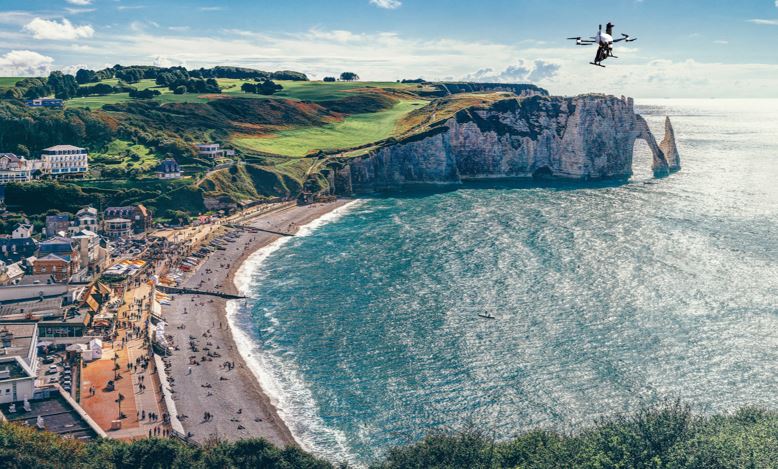 Researchers at the Center for Research on Coastal Environment (CREC) of the University of Caen, in Normandy, France, faced four major challenges:

Additionally, CREC required that the UAV be

To deal with these challenges and requi-rements, they hired AltiGator to build a rotary wing UAV. AltiGator modified an OnyxStar XENA compact, foldable octo-rotor UAV, which features a gimballed camera mount, and equipped it with a Septentrio GNSS board and a Sony multispectral camera to overcome all the challenges faced by the researchers.

The project’s requirements and constraints led to the selection of Septentrio’s AsteRx-m2 UAS board because of its reliable multi-frequency and multi-GNSS constellation measurements, which allow it to operate in topographies where other single- and dual-constellation receivers cannot function optimally. Its ultra-low power consumption helped the battery life to be more efficient while operating in a windy environment. Additionally, its integrated Advanced Interference Mitigation (AIM+) system guarantees the safety and availability of operations in busy urban environments.

For this mission, CREC required PPK positioning because, for aerial mapping, it can deliver more reliability and longer range from the GNSS base station than real-time kinematic (RTK) positioning. While RTK positioning processes the data during the flight, PPK positioning logs data onboard the UAV and combines it with data from the base station once the flight is completed. PPK positioning therefore eliminates the risk of losing data or initialization due to radio link outages and allows the processing software to trace back and forth through the data multiple times to give more comprehensive results.

While flying its missions along the cliffs, the UAV took pictures and recorded the spatial coordinates of each image in a digital log. After the flight, these logs were processed in GeoTagZ and much improved higher accuracy coordinates stored in each picture’s exchangeable image file format (EXIF). This greatly improves the speed and precision with which orthophotos are later built without the need of GCPs, which are impossible to place in these locations.

Use Of The Data

CREC provides data and advice to public institutions. For example, it might employ observations it has made to advise them on how best to build, maintain, and improve dams and then monitor those dams to check their performance. The CREC researchers were especially impressed with the spatial resolution and accuracy of the images of the cliffs that they were able to collect with the Septentrio positioned AltiGator system. These images will greatly assist them and public agencies in assessing the stability of the cliffs and identifying the more likely locations of failures, in order to prevent or reduce damage, injuries, and fatalities.