Some of the most interesting activity in the universe happens at radio frequencies. And, as radio wavelengths are so much greater than those of visible light, so radio telescopes have to be so much larger - several kilometres larger - to achieve the same resolution. The Square Kilometre Array (SKA) will, by exploiting the precise timing properties of GPS timing receivers, be the largest telescope on Earth when it comes into operation.

Telescopes that surpass the limits of engineering

As of September 2016, the FAST telescope in China became the largest radio telescope in the world. However, even with a diameter of 500 m (1640 ft), the size of the FAST telescope is a long way off what radio astronomers would like. The solution is to simultaneously collect data from multiple radio telescopes and combine them using a technique known as astronomical interferometry. Using this technique, a network of telescopes can emulate a single monolithic telescope equal in size to the maximum separation or baselines of the individual telescopes. The resolution of such a network is far in excess of anything achievable by any single telescope.

To connect the individual radio telescopes in a network, transmission lines such as coaxial cables or fibre optics have traditionally been used. With the advent of highly-stable timing references, such as atomic clocks and masers, data from the individual telescopes can be stamped with a very precise time. By locking the timing reference to a GPS receiver at each telescope location as shown in Figure 1, the time stamps on the data can all be synchronised to the same time, namely GPS time. This allows the data from the different telescopes to be properly aligned when processed using cross-correlation techniques. Using GPS time as the common time reference effectively removes the limit on distances between telescopes for what is known as Very Long Baseline Interferometry (VLBI). 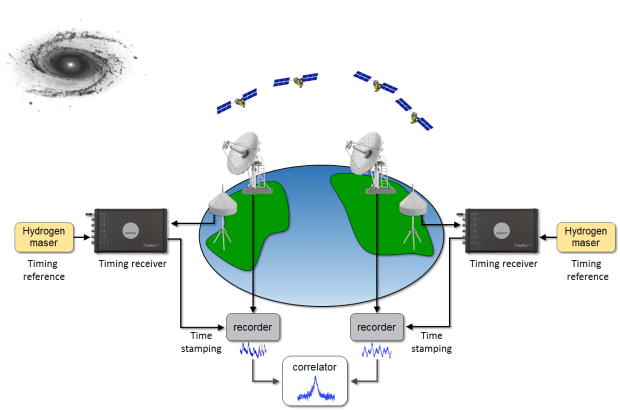 When complete in 2030, the Square Kilometre Array (SKA) will have a combined collecting area far greater than its initially planned one square kilometer making it the largest telescope on Earth. The telescope will consist of networks of thousands of smaller antennas both in South Africa and Australia. The observational data from the different networks will be synchronised using GPS timing receivers to simulate a one single giant radio telescope.

Commensurate with its size, the goals of the SKA are no less ambitious. It aims to shed light on how the earliest stars and galaxies were formed and how they evolve. The source of the dark energy driving the accelerating expansion of the universe. It will also provide the most stringent test to date of Einstein’s general theory of relativity.