As if locked together in symbiotic relationship, the increase in the number of devices on the road that use GPS technology is matched by an increase in the number and variety of jamming devices that would seek to thwart their operation. Whilst jammers are illegal, their signals can affect GPS devices over several km as Figure 1 shows, making it difficult to reliably identify vehicles using jammers. This new technique developed by Septentrio uses a single dual-antenna receiver mounted on gantry over a highway to remove some of the ambiguity in vehicle identification. In addition to determining the lane in which the vehicle is travelling it can also provide a time signal for the exact moment that the jammer passes the detection system.

The detection setup consisted of two antennas placed at either end of a highway gantry that was already in use for the detection of road tolling equipment on vehicles – see Figure 4. The antennas were connected to an AsteRx-U receiver that was placed in waterproof box where it was left to log data on its internal disk of the duration of the trial.  Over the course of 7 days, 115 hours of data were collected and 45 jamming events were seen: 16 from chirp jammers, 10 from pulsed jammers and 19 interference events from other sources. Figure 2 shows examples of a chirp jammer and a pulsed jammer both in frequency and time domain that were collected during the trial. The chirp jammers tended to be more powerful as seen in Figure 3. The rapid frequency variation or chirping nature of their signal allows them to be far more destructive over far greater distances than other type of jammer.

Figure 1: a passing chirp jammer can affect the Carrier-to-Noise values of GPS signals for several minutes. Such disturbances can now be exploited to determine not only the lane in which the vehicle was travelling but also the precise time it passes a detection gantry.

Placing the Main and Auxiliary antennas of the AsteRx-U as far apart as possible over the highway meant that the difference in transit times to each antenna were large enough to be able to discriminate between lanes. The higher power and wideband nature of the chirp jammer signal was for once advantageous as it made the traffic lane easier to resolve.
Figure 5 shows an example of a passing chirp jammer. The signal power on both the Main and Auxiliary antennas is highly skewed and falls off sharply after its maximum value. This establishes that the vehicle has passed under the detection gantry. A cross-correlation analysis of the jamming signal in each of the antennas yields a path difference to the Aux and Main antennas of around 3.5 m—a value that can be unambiguously associated with a vehicle travelling in lane 1.

Countries that charge freight transport by the km on their roads using on-board GPS toll equipment are at the mercy of GPS jammers. Revenue is lost not only from the vehicle with the jammer but any vehicle within a radius of several km can also be affected. This trial has demonstrated the possibility of using a single dual-antenna receiver to identify both the lane in which the vehicle is travelling and the exact passing time. This method relies on the receiver being able to record RF spectra on two antennas whilst not suffering from jamming itself - a task ideally suited to Septentrio’s AsteRx-U. 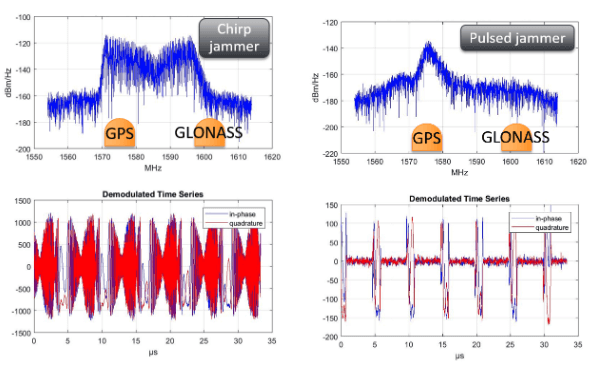 Figure 2: Spectrum plots showing of two of the 45 interferers that were detected over the 115 hours of the trial. The combination of time and frequency domain plots allow the type of jammer to be identified.

Figure 3: The duration of each interference event according to jammer type. The chirp jammers tended to be more powerful and with far longer lasting affects on GPS signals than other jammers. 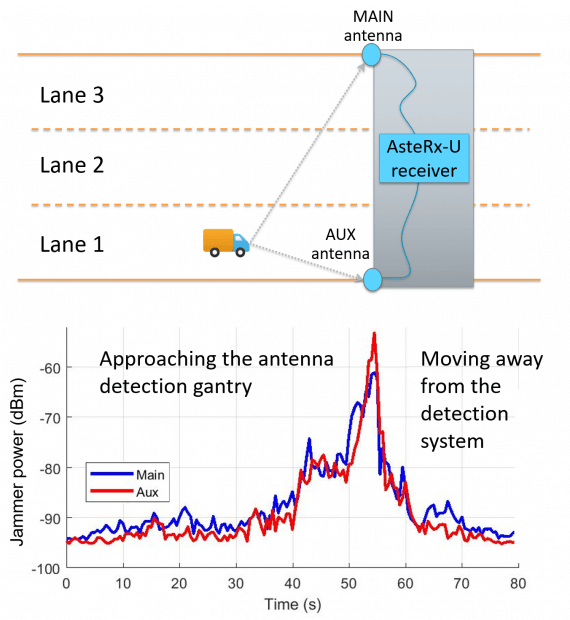 Figure 4: The dual-antenna AsteRx-U receiver setup above a 3-lane highway. The antennas were angled forward towards the oncoming traffic to be able to differentiate direction of travel. 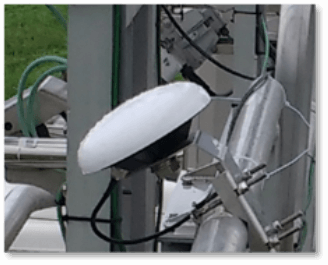 Figure 5: The power of the jammer on each antenna was recorded as a function of time to ascertain direction of travel and exact time of passing. A comparison of the Main and Aux signal profiles was used to determine in which lane the vehicle with the jammer was travelling.