Why all the fuss about Antarctica?

It’s the coldest, driest and windiest continent on Earth which many might understandably prefer to leave well enough alone. It is however home to 70% of the world’s fresh water and 90% of all the ice on Earth which if it melted, would raise sea levels by almost 70 m (230 ft.) Being roughly half the size of Africa and with 98% of its surface covered in ice, it reflects a great deal of heat from the sun back into the atmosphere. Any changes to the ice sheet on Antarctica will clearly have global repercussions and need to be kept a close eye on. GNSS receivers have proven to be an invaluable tool for the job. 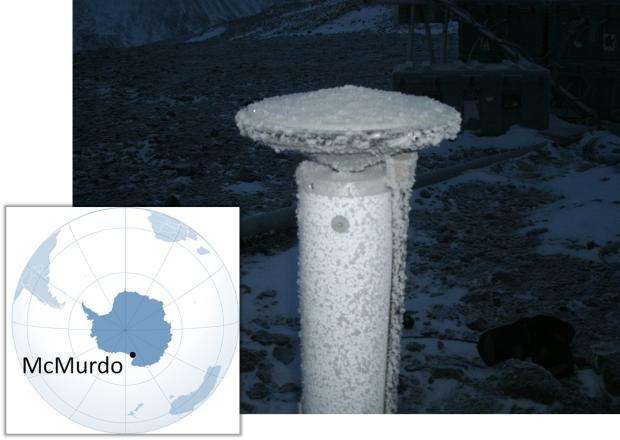 A GNSS antenna feeling the chill on Observation Hill adjacent to the McMurdo Station on Antarctica (Photo credit: Spencer Niebuhr/UNAVCO)

How do GNSS receivers occupy their time in Antarctica?

Scientific monitoring in Antarctica is a multi-sensor endeavour with GNSS receivers playing the starring role. While scientific activity centres quite naturally, around monitoring the state of the ice sheet, GNSS receivers have also found other outlets for their talents.

GNSS receivers have long been used to measure the movement of tectonic plates and this tradition has continued in Antarctica. Current combinations of receivers and post-processing techniques can detect ground movements down to the level of a couple of mm per year.

As the ice sheet melts, GNSS receivers are used to measure the resulting rise of the bedrock to determine the amount of ice lost. They can also measure the small horizontal displacement to identify location where the ice was lost.

98% of Antarctica is covered by ice sheets with an average thickness of about 2 km. This massive weight compresses the underlying bedrock but as the ice melts, the weight of the ice decreases and the bedrock rises - a process known as crustal or isostatic rebound. These small changes in the height of the rising bedrock can be measured by GNSS receivers to determine the amount and rate at which the ice is disappearing.

Melting ice produces not only changes in the height of the bedrock but also much smaller horizontal movements. By disentangling these horizontal displacements from the much larger background of tectonic plate movements, the source of the ice loss can also be pinpointed.

CALCULATING THE AMOUNT OF WATER VAPOUR IN THE ATMOSPHERE

Water vapour is the most abundant greenhouse gas in the atmosphere yet it is the least accurately measured. Useful climate models need accurate measurements of water vapour and that's where GNSS receivers come in handy. Using precise measurements of GNSS signal delays, not only can receivers provide accurate data on water vapour, they provide it with time and position variability at a level not previously possible. And, unlike alternative methods, they don’t need human interaction to carry out their work - an important asset in a place like Antarctica.

Charged particles from the sun can cause disturbances such as scintillations in the upper ionospheric layer of the Earth’s atmosphere. The Earth’s magnetic field guides charged particles to the poles making these regions ideal laboratories in which to study these phenomena. Because the effect of the ionosphere on GNSS signals depends on frequency, a multi-frequency GNSS receiver is the ideal tool for measuring such disturbances.

The challenge is not just to produce high-precision data 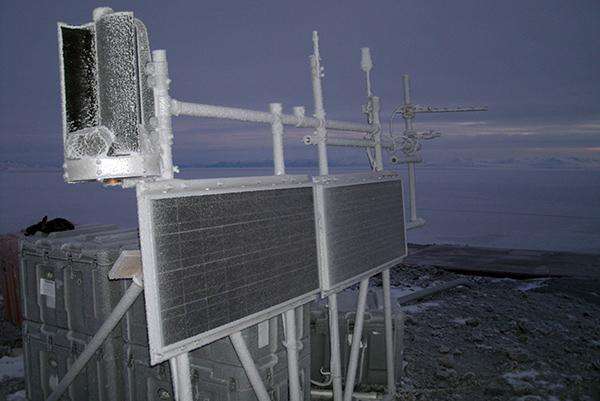 Solar panels powering a PolaRx5 receiver housed in a Hardigg case on one of the short days towards the end of the Antarctic summer close to McMurdo(Photo credit: Spencer Niebuhr/UNAVCO, May 2017)

Working in temperatures down to -80 °C (-112 °F) with huge distances between measurement sites means that equipment cannot be readily repaired and so needs to work reliably and independently over extended periods.

Sites have to be self-supporting. Often, their only power supply is from solar panels favouring the use of low-power devices.

The transfer of GNSS data on Antarctica is also problematic. Without a communications infrastructure, data is transferred over radio or satellite links. The limited bandwidth of these telemetry systems means that data storage on the GNSS receiver itself should be robust and data transfer should be smart. The PolaRx5 for example, is able to check file fragments at the remote data location and only transfer or retransfer the missing parts. This reduces the amount of data transferred and the time taken while ensuring completeness of data.

The concentration of electrical and electronic devices at measurement stations has been known to cause interference to GNSS signals. On the PolaRx5, the AIM+ interference mitigation and monitoring system is able neutralise the effects of the most malignant interferers to maintain data quality.