Drones rise to the challenge

How do you inspect a structure that’s almost 160 m high and 120 m in diameter? With a few weeks to spare, a crash course in abseiling and head for heights, you could certainly give it a go. Imagine however that you need to collect enough data for a 3D model with the precision of 1 mm and all within a week. This was the challenge facing Aetos Drones when recently tasked with inspecting one of the cooling towers at Tihange Nuclear Power Station near Liege in Belgium.

Keeping an old-timer in tiptop condition 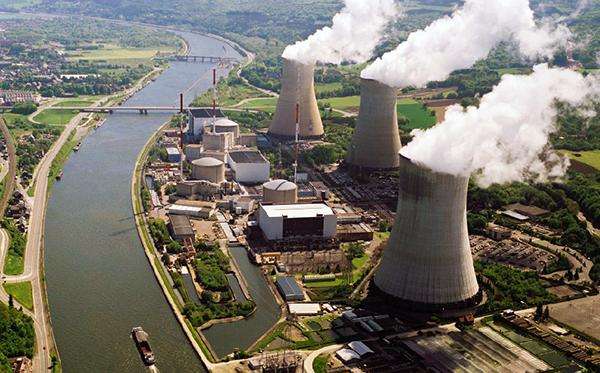 The three reactors at the Tihange Power Station came online between 1975 and 1985 making the oldest of the three a ripe old 40. Cooling towers built in this era have a life expectancy of between 15 and 20 years but with careful maintenance, the lifetime can be extended a further 20 years.

Together, the three Tihange reactors contribute about 25% of all electricity generated in Belgium. To keep the lights burning in Belgium until the planned decommissioning date in 2025, the cooling towers need to be kept in good working order and fortunately, drones equipped with highly precise and reliable GPS receivers are there to help.

What can go wrong with cooling towers?

In a Pressurised Water Reactor, such as that at Tihange, the job of a cooling tower is to supply cold water to the condenser that cools the steam used to drive the electricity-generating turbines, back into water.

Cooling towers are elegantly simple in their operation: the warm water from the condenser is sprayed into the tower by a network of sprinklers, warming the surrounding air and causing it to rise. This in turn draws cooler air in through openings in the base of the tower maintaining a constant, natural draft of cool air through the tower.

In any system where water plays a part, corrosion will surely follow. Cooling towers are hollow, thin-walled structures made from reinforced concrete and, the humid environment can over time, lead to corrosion of the metal elements of the tower. In every cycle through the cooling tower, about 2% of the water evaporates forming the characteristic steam clouds. This increases the salt concentration in remaining water which in turn increases its corrosive power. High winds and icing during the winter can also cause damage and weaken the cooling tower.

The drone inspection specialists Aetos Drones, were called in to carry out the inspections with none other than Lieve Van Gijsel, Belgian’s first certified drone pilot, at the helm. An octocopter fitted with a high-resolution camera, a RADAR system and an AsteRx-m UAS receiver was flown vertically up and down the sides of the cooling tower whilst taking photographs at regular intervals.

The RADAR system was AIRobot’s Ranger, an add-on sensor specifically designed for distance detection on UAVs. The octocopter had to get close enough to the tower to get good quality images but not so close as to risk getting tossed around by the turbulence generated by the tower - a job for which the Ranger was perfectly suited.

After processing with GeoTagZ, the photographs were then uploaded to the photogrammetry software Agisoft PhotoScan which is where the fancy computer comes in. Over the course of several days, the photographs were stitched together to produce a highly-detailed 3D model of the cooling tower, precise to the level of 1 mm. The experts at Tihange are then able analyse the surface of the cooling tower down to any required level of detail. 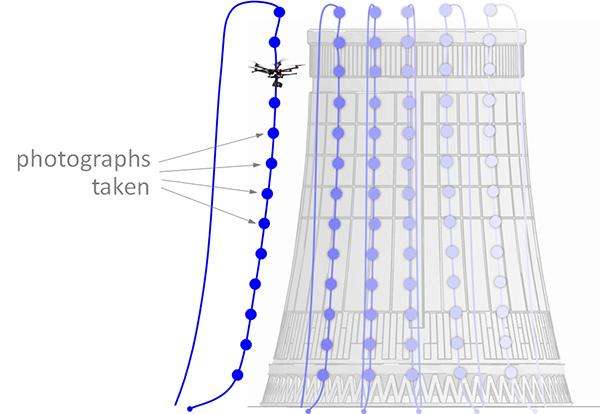 The drone was flown close to the cooling tower as shown, taking photographs at regular intervals during its descent

3D inspection models with 1 mm resolution are made possible using high-quality, multi-frequency GNSS measurements from high-end receivers like the AsteRx-m.

Not only does the positioning have to be precise, it has to be reliable and that means: accurate error models, continuous tracking during mechanical jolts and advanced satellite integrity monitoring (RAIM).

For large-structure inspections such as this, multi-constellation positioning is essential to ensure there are always enough satellites available to work with. The receiver will also need a good multipath mitigation filter (APME) to disentangle direct and reflected satellite signals to avoid jumps in the calculated position.

The AsteRx-m UAS has established itself as the receiver of choice for UAV applications requiring high-precision positioning. With the recently-released AsteRx-m2 UAS, drone inspections can take on applications at an entirely new level of difficulty. The AsteRx-m2 UAS adds BeiDou and Galileo as well as L5 frequency tracking. It also includes the AIM+ interference mitigation system. The additional constellations allow operation in areas where overhead structures limit the scope of single and dual-constellation receivers.